As someone who works a dreary desk job, I will often spend my breaks scouring the internet, looking for interesting sites to pass the time.  Earlier this year, I found a fantastic Tumblr blog which serves as an archive of video game magazines.  Old Game Magazines features high quality scans of covers and articles from the glory days of print gaming media (read: the 1990s).  Over the last few weeks, this Tumblr page has focused on scans from my favorite gaming magazine, Nintendo Power.  Along with the extensive strategy guides and fold-out posters that came standard every month, there was a period of time when comics were printed on the pages of this classic publication.  These paneled stories were serialized over several issues and were normally tied to the release of a big Nintendo property, such as Super Mario World or Star Fox.  Since a direct sequel for the SNES classic is looming over the horizon for 3DS owners, now is a prime time to have a look at the Link to the Past comic from Nintendo Power.

First published in January of 1992 (issue 32 of NP), the Legend of Zelda: A Link to the Past was written and drawn by Shotaro Ishinomori.  A famous manga artist, Ishinomori broke into the industry working as an assistant to animation legend, Osamu Tezuka.  The story goes that in 1955, Ishinomori entered an art contest for the magazine Manga Shonen while he was still in high school.  Impressed with the student’s work, Osamu Tezuka contacted Ishinomori, asking him to become an assistant on the hugely popular Astro Boy.  After years of work as an assistant, Ishinomori branched out on his own and went on to create several famous series, such as Cyborg 009 and Kamen Rider.  Through his impressive body of work, Ishinomori successfully established an entire genre of “transforming” superhero media, and his accomplishments have been honored by numerous outlets around the world.

For the Link to the Past comics, Ishinomori focused on the story of the game, in which a young boy becomes entangled in a quest that would transform him into a hero of legend.  Unlike the mostly mute hero of the video games, the Link of this comic starts out as something of a clumsy, inexperienced kid who has plenty to say.  While not exactly prepared to defeat an ancient evil, Link does possess a plucky courage that causes him to run blindly into a stormy night to save a woman he has never even met.  The general plot of the video game is mostly unchanged in the comic, save for some minor enemy details and quite a bit of flourish on the locations in the game world.  The core story of Link acquiring the Master Sword and traveling to the Dark World to defeat Ganon and save Zelda remains, albeit with several new characters and encounters.

Probably the two most notable additions to the cast of characters are a headstrong young knight and a feisty fairy, named Roam and Epheremelda respectively.  Roam serves as a sort of rival character for Link, even though the two share the similar goal of killing Ganon.  A master of archery, Roam is a descendant of the Knights of Hyrule who fought to imprison Ganon many years ago.  Even though he regularly shows up to harass and test Link on his quest, Roam’s efforts in finding the Silver Arrow directly aid in Ganon’s defeat.  Epheremelda is a fairy who Link manages to save from a band of monsters once he arrives in the Dark World.  Grateful for his rescue (and crushing on him hard), the young fairy agrees to accompany Link and help him on his quest.  What is particularly interesting about Epheremelda is that no such fairy guide existed in A Link to the Past, but the idea of a helper sprite would become a recurring piece of the Zelda universe thanks to Navi in Ocarina of Time.  It seems that Ishinomori was a bit of a forward thinker for the Legend of Zelda games. 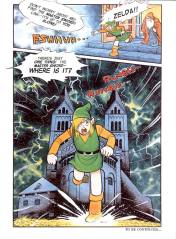 The artwork is extremely impressive in the Link to the Past comics.  Most of the character models would be right at home in Ishinomori’s other works, with expressive anime-style features and minimal line work.  Certain designs are even taken directly from previous Ishinomori models, such as Roam who was based on the character Jet Link from Cyborg 009.  The backgrounds range from dynamic splash images for action scenes to highly detailed environments that set the mood for every scene.  The color work is extremely striking throughout the entire series.  Ishinomori uses a sort of watercolor-style technique, where shading and elemental effects are accomplished through gradual color changes instead of bold lines.  The result is a mood of epic fantasy that suits the comic quite nicely.

Once the series had completed its run in Nintendo Power, all of the comics were collected and published as a graphic novel in 1993.  Now a highly prized collector’s item, this standalone version was once being sold in a bundle at the back of Super Power Supplies catalogs for the unbelievably low price of $25.  I have no idea why I never coerced my parents into getting that bundle for me as an obligatory Christmas gift.  Knowing me, I was probably too busy playing Donkey Kong Country at the time, and just assumed that since I had the issues of Nintendo Power with the comics, that was good enough.  As an adult whose video game magazines are all in storage at my parents’ house, I would love to have such an outstanding video game comic at my disposal.  Oh well, I will just take solace in fantastic sites like Old Game Magazines and spend hours pouring over my computer screen at the printed pages of the past.

4 thoughts on “A Link to the Past”