If the advertisements leading up to the 2013 release of Tomb Raider are to be believed, Lara Croft is a survivor.  Years of being relegated to a blend of lady-hero badass and video game sex symbol have worn heavy on the virtual explorer.  In spite of exploitative media and rumors of nude codes, Lara has returned in a solid action-adventure game.  Similarly, the recent release of a new comic from Dark Horse has provided her with a rebirth in print media as well. 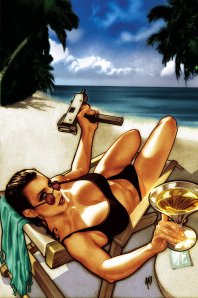 It was back in 1997 when Lara Croft made her first appearance in comic books, as a cross-over in Tomb Raider/Witchblade #1.  From this initial Top Cow Productions offering, Lara went on to have a comic book run of fifty issues based on the original games from Core Designs.  A glance at a gallery of art from these comics reveals that many of them featured the Lara Croft of the early PlayStation days: top-heavy, scowling-yet-seductive, and often wearing an improbable wardrobe for adventuring.  Just as the latest game took heavy redesigns for the beloved character, the offerings from Dark Horse follow suit with a fresh comic for the British bombshell.