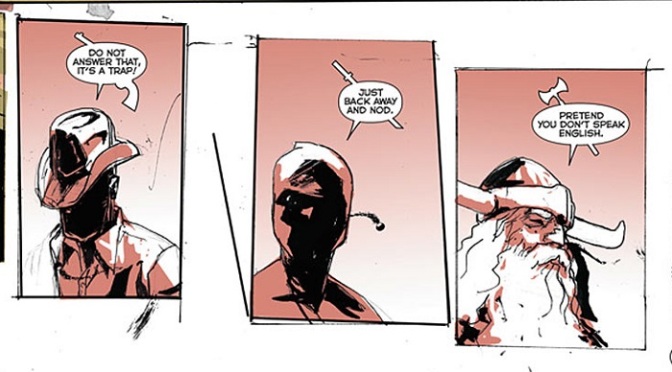 Is this the last hurrah?  We have reached the end of this digital diversion, readers of Geek Force Network.  I have shared my favorite comic book video games from before and after the year 2000, so all that remains are those select series that have no dog in the video games fight.

Historically, most adaptations of comic books have come from the big two, Marvel and DC.  They have been the movie cash-ins and superhero beat ’em-ups, the fighting game cross-overs and the Lego-based collectathons.  Fortunately, the rise of indie games and comics have given way to the rebirth of the point-and-click adventure genre.  Studios like Telltale Games have been turning fantastic comics into wonderful video games for the world to enjoy.  If it weren’t for their efforts, two of my favorite series may have remained confined to the printed page, never to grace my gaming screens (thanks for Bone and Fables, Telltale).  But even with the recent glut of sequential art adaptations, there are still comic books which I would love to see translated to the digital world. 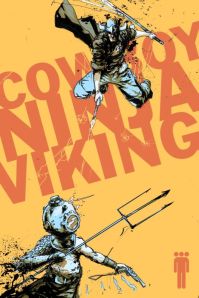 It would not surprise me if you haven’t heard of Cowboy Ninja Viking; the name alone sounds like a list of perfect jobs according for a five-year old.  Released in 2009, this ten-issue series from Image Comics was written by A.J. Lieberman (Gotham Knights) and illustrated by Riley Rossmo (Dark Wolverine).  These comics revolve around a counter-intelligence group of multiple personality disorder patients who are transformed into operatives known as Triplets.  Each one of these agents has three different personalities implanted in their minds, along with the specific skills and knowledge of each one.  The comics pick up after the fall of the group, where most of the Triplets have become hired killers and the main character, Duncan (the titular Cowboy-Ninja-Viking) is sent to find and stop the rogue Triplets.  The artwork is full of heavy contrasts, mostly black-and-white images that feature only one or two colors per page. 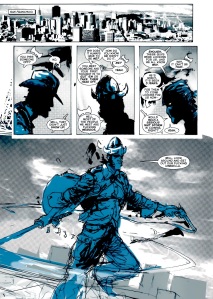 The battle-heavy story full of espionage and humor would translate quite well to a tongue-in-cheek action game where the player takes control of Duncan on his quest to take down the other Triplets.  The three personalities of Duncan could serve as different skill sets for battle and movement (Cowboy- ranged, Ninja-light melee, Viking-heavy melee), and the other Triplets would make for a variety of interesting boss battles.  Instead of trying to turn the hyper-noir art to the third-dimension, I can see where a two-dimensional side-scrolling game would highlight the exceptional tone and style of the comics.  Top it all off with unlockable characters that allow the player to use the other Triplets in the game, and you’ve got a solid action title (although knowing the current market, each of the other Triplets would be DLC).

Standing right beside Batman at the top of my favorite comic book characters is Hunter Rose, better known as Grendel.  A successful author by day and a black-and-white clad assassin by night, Grendel made his debut in 1983 from writer and illustrator Matt Wagner.  The comic books of Grendel have featured a variety of short tales about this masked man and his rapid takeover of New York City’s organized crime, mostly through his acrobatic and ruthless killing nature.  The art style of Grendel has been just as varied thanks to the contribution of numerous illustrators, ranging from full-color pages with jagged line work to the soft edges of water colors painted exclusively in black, white, and red.  No matter what the story or art, certain elements of Grendel hold fast: a tragic tale of a young man who was an apex predator among sheep and the art deco city that was his territory.

Before Arkham City hit the scene, I could not have imagined an appropriate video game adaptation for Hunter Rose and his fearsome alter-ego.  Now that Batman has appeared in a game that combines comic book action with the elegant and brutal world of Gotham City, I believe a similar type of game would suit Grendel perfectly.  A stealth-action title with a strong art deco atmosphere would provide the player a realm to hunt as Grendel and take control of the city’s criminal activity.  To keep the game from losing the pacing and tone of the comics, I think limiting the open-world nature of the city would be a key component, so as not to turn Hunter Rose into a mindless, one-liner goofball that kills for fun.

If you haven’t had the pleasure of reading Saga, throw that on your “to do” list right now.  Easily the best new IP I have read in years, Saga is the multiple Eisner, Hugo, and Harvey-award winning space opera/fantasy comic from writer Brian K. Vaughn (Y: The Last Man) and artist Fiona Staples (DV8: Gods and Monsters).  The story follows a recently married couple from long-warring alien races, Alana and Marko, as they flee from authorities from both sides of a galactic war and struggle to care for their newborn daughter, Hazel.

The world of Saga is an expansive universe filled with strange alien races, high technology, and a dash of arcane magic.  There are off-kilter bounty hunters, planet-sized creatures, and a giant hairless cat that will announce when a person is lying.  Every issue adds new and interesting characters and locales, but never loses sight of the core story of new parents trying to find their place in the universe.  The artwork is equally impressive, with expressive character designs and stellar environment spreads. 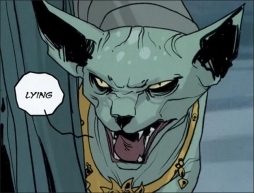 All of this comic book goodness would make for a great adaptation, but I am at a loss for what type of video game would suit Saga.  An obvious choice would be a co-op action game where players control Alana and Marko in their odyssey across the stars.  But I think the better option would be a new story based in the world of Saga, where a fresh character will occasionally interact with the major series moments.  Maybe an action-adventure game where the player assumes the role of a bounty hunter hired to hunt down the fleeing couple.  That way, the creators of Saga could write up new material that wouldn’t interfere with their main comic plot and satisfy their rabid fans at the same time.  Let’s be honest though: if it’s not a game with Lying Cat, no appetite will be sated.

And so the last hurrah has been had.  I know there are other fantastic comics I would like to have in video game format, but that is the nature of being a geek.  I simply want to explore more of the wonderful worlds behind those printed panels.  In the meantime, I’d love to read your dream comic book video games, so please leave your picks in the comments!  Tune in next week as I return to my usual comic book adaptations of video games; same GFN-time, same GFN-place!

For more bits and pieces on video game comics, be sure to check out Geek Force Network every Monday.  More info can be found here.

3 thoughts on “Favorite Comic Books That Should Be Video Games”