Origin stories for Nintendo characters tend to be rather ambiguous.  Mario and Luigi could be plumbers born and raised in Brooklyn, or two lost children from the Mushroom Kingdom.  Donkey Kong has been the son of Cranky Kong, the grandson of Cranky Kong, or just some angry ape that kidnaps Pauline.  And don’t even get me started on Link and his mixed up timeline.  Amidst all of this confusion, it seems that a certain Nintendo mainstay has yet to get a proper point of origin in the wide world of video games: Wario.

Making his first appearance in 1992 as the antagonist of Super Mario Land 2, Wario was already a full-grown villain with no major backstory.  He wasn’t the lizard tyrant of a deposed kingdom.  He wasn’t an invader from outer space.  Wario was just a greedy guy who wanted a castle so he took Mario’s.  That’s it.

After Mario knocked the baddie off his usurped throne and everything was returned to the status quo, Wario became a sort of selfish antihero.  For the 17 games that followed, Wario concocted plenty of get-rich-quick schemes to add more treasure to his hoard (normally involving quirky platformers or hyper-odd minigames).  Second only to his love for money is Wario’s contempt for his goody two-shoes counterpart.

In Wario’s mind, Mario has had it easy his entire life; getting the glory and riches for nothing and gloating about it all the way.  You wouldn’t necessarily hear Wario voice this opinion in video games, save for the occasional snide comment (and constant sneer).  The backstory of these two once-best friends was detailed in January 1993, through a comic in Nintendo Power. 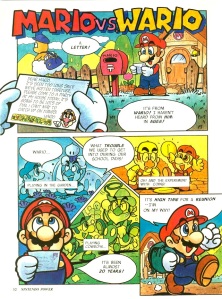 Mario vs. Wario is a ten-page story that debuted in Issue #44 of good ole’ NP.  The comic was handled by the same duo that created the Super Mario Adventures comics; written by Kentaro Takekuma and illustrated by Charlie Nozawa.  At the start of this short tale, we see Mario checking his mail to find a letter from his old pal Wario, inviting the plumber to his house for a party.  Eager for a friendly reunion after twenty years, Mario packs a bag and hits the road.

Along the way, Mario is confronted by most of the bosses from Super Mario Land 2.  But these obstacles are nothing more than happy little distractions for our hero, as he deftly dodges each one and even uses some of them to help him to Wario’s house.  Little does Mario know that his supposed friend set up each of these encounters.  Unlike Mario’s jovial demeanor, Wario has nothing but contempt for the plumber.  The saccharinely sweet memories of childhood to Mario are moments of relentless pain and bullying for Wario,  The entire party invitation was a scheme to get revenge on Mario for all of the torment he dealt out when they were children.

When Mario finally arrives at the house, he is attacked by a gigantic version of Wario (which ends up being an inflatable power suit).  Once Wario is disarmed, he immediately breaks down and cries to Mario about the years of mental scarring brought on from their childhood.  Ever the optimist, Mario suggests they let the past fade away and make new fun memories together.  Unfortunately, this involves the same crumby game of playing cowboys and shooting Wario with a toy gun, but as long is Mario is having fun, who cares?

After reading this comic, it’s pretty clear that Wario has earned his grudge against Mario.  I can only imagine how I would feel if some kid who treated me like a dopey sidekick grew up to be super successful with ease, while I struggled to find my way in the world.  I would probably grow a wicked moustache, work out a lot so my arms would get ripped, and eat whatever foods I wanted to sate my angry hunger (garlic, most likely).  If my resentment was strong enough, I might even try to muscle in on this jerk’s happiness, cuz’ who does he think he is, strutting around saving princesses and living in a castle?

In other words, I can easily see how Wario came to be the villain we all know and love.

Just like the Link to the Past series and the Super Mario Adventures series, this Wario-filled comic can be read over at Old Game Magazines.  Please be sure to check it out and follow them for other great pieces from video game magazines of yesteryear!

For more bits and pieces on video game comics, be sure to check out Geek Force Network every Monday.  More info can be found here.