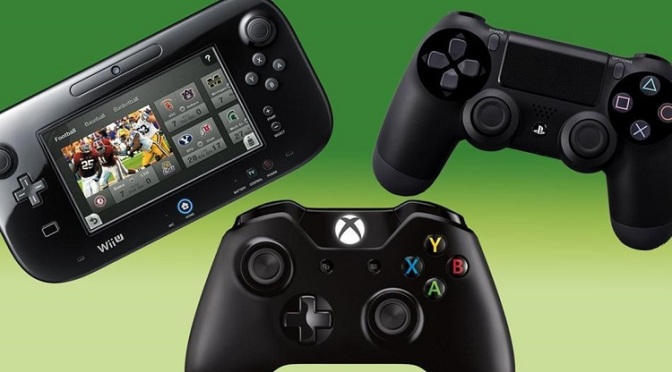 Full Force is GFN’s weekly look at some of the biggest news in geekdom, from video games to anime to movies and everything in between. We also welcome your comments below, if you want to join the conversation. This week, our panelists take a look at the three next-gen consoles now that they all been out for at least three months.

The Playstation 4 and Xbox One have been out for almost three months now. Have you picked up one (or both), and if so, what’s your verdict? If not, why have you stayed away? END_OF_DOCUMENT_TOKEN_TO_BE_REPLACED

I had the awesome chance to play during the Elder Scrolls Online’s last beta stress test and managed to become addicted. It had become a must-have game on its release and I was excited to for more chances to explore through this diverse atmosphere. But when the news of ESO’s subscription fee hit the web, I couldn’t help but become a bit disheartened. I’ll share my own reasons why.

Many people argue that the Elder Scrolls Online can survive beneath a monthly subscription fee, and while $15 a month is not a bad price for such a huge and anticipated game, it will definitely create a bit of indecisiveness for console players like me.

I plan to eventually purchase a PS4 and I’m extremely excited for the chance to enjoy a MMO experience on my television screen. My PC isn’t made for gaming, and while I’ve enjoyed the beta experience on there, it doesn’t look very great, and in a game like Elder Scrolls Online where I can spend hours of my day, graphics are a must. Especially on PC.

Because of this, a cool console experience is a must for me, and while I’m ecstatic over the fact that the PS4 will provide some quality MMO games, the price may repel me. I’ll be spending about $400 for the PS4, $60 for the game itself, the price of PlayStation Plus so I can enjoy my online games, and $15 a month just to continue playing the Elder Scrolls Online. Is anyone else a little bit frustrated by this? I kind of am.

Is there anyone else planning on buying The Elder Scrolls Online at release? If so, what do you think about the subscription fee? Do you think the game will be able to survive on a life of monthly subscriptions, or will it fall to become a free-to-play title like Star Wars: The Old Republic? While I’m not too worried about the game’s life on PC, I wonder how this will affect console players.

Watch us record episode 24 of Game Sammich LIVE at 6:30pm PST below. If you’d like to chat live with us while we record, head over here, or connect directly via irc to irc.mibbit.net, in the #GameSammich channel.

Sooo apparently the president of id Software – Todd Hollenshead has flown the coop after 17 years, Sony unbreaks the bricks, Ouya spreads like wildfire, and Google might get in on the console wars?  Leadwerks is doing a kickstarter to build Linux games on Linux…what a novel idea!

Bert & Errnie are back this week spreading on that buttery banter.  We’ll also be joined by a friend of the show Dan Gardner!

Video will update once we go live.

Watch us record episode 23 of Game Sammich LIVE at 6:30pm PST below. If you’d like to chat live with us while we record, head over here, or connect directly via irc to irc.mibbit.net, in the #GameSammich channel.

Bart is MIA taking up his passion in the art of wedding crashing again & Errn is under the weather 😦 Our guest host is Andrew Petalik for the night, he’s part of our very own G+ Sammich Community!

Tonight we speculate on the potential ability to share games on Steam sometime in the future, lolXBox180 backpedal, Sony does an oopsies with PS3 update, and what the crap is wrong with modern MMO’s & their cookie cutters.

Andy from GamersCircle Comics hooked us up with some more digital Marvel Comic codes again too!

As always, the best experience includes the live chat where you can join in on the discussion.

Video will show up here once we go live.

Don’t forget to take a gander at the latest Green Man Gaming deals out there.  Pre-Order your FFXIV!

Microsoft has revealed they will be selling next generation, first party, Xbox One games at 60 dollars. Of course they did.

I originally read this article on IGN, where the person reporting qualified this story by saying this was “good news.” Maybe this is just a case of me getting my expectations too high, but to me, it’s honestly disappointing. I really was hoping that with all of the effort spent trying to implement DRM and impose limitation to fight piracy, they would throw the consumer a break, and the payoff would come with cheaper games. “Hey guys, THIS is the justification for fighting piracy!” they’d say as they made the announcement as they raised the console above their head and bald eagles flew American flags around the stage. This is the model that Steam employs, after all…the lower priced games, not the bald eagles…

I understand they have no actual reason to do this, from a business point of view, but it’s just another action that shows Microsoft is out of touch. Did they have to do lower the price? No, certainly not. But after audiences agreed that the PS4 dominated the Xbox One at E3, and that PS4′s are being pre-ordered at a two-to-one rate to the Xbox One, I keep thinking Microsoft is going to pull some play to swing  momentum back to their side. I’m like a dog that keeps asking to get kicked at this point.

I should probably give up holding out for Microsoft. I didn’t want to be converted. I love my 360. But it’s just not happening and I need to accept that.

Insert cliched sentence about “dust settling” here. Still, now that we’ve all had time to calm down from the madness of E3, let’s discuss how things went for the Big Three. My Twitter feed was drowning in snark, most of it pretty funny, along with some occasional rage/betrayal. It was my first E3 on Twitter, and I can only hope that future expos are just as entertaining. So, just some quick thoughts to start your week off right:

Microsoft: The odds were definitely stacked against them after their dismal Xbox One reveal, but they promised that E3 would be all about the games, and I feel they delivered on that. They showed off a few nice exclusives, kept the TV/sports crap to a minimum, and generally had a much more solid conference than most people give them credit for. However, they made a huge gaffe on the price, one that I doubt they’ll be able to recover from. $500 was expensive even before Sony announced their price, but now it just seems ludicrous. I liked their conference (aside from the price announcement), and if they hadn’t already committed a multitude of marketing sins on the hardware side I think they’d have a real shot, but alas. What kills me is that the very publishers that Microsoft tried to appease with the always online/used games dealio (like EA and Ubisoft) are already hanging Microsoft out to dry after witnessing the backlash. It’s kind of a shame, because I own a 360 and not a PS3, and I wanted to continue that legacy, if I could.

Sony: These guys went right for Microsoft’s throat, which is exactly what they should’ve done. All they did was announce that nothing had changed DRM-wise from the previous generation and they instantly won over the crowd; Microsoft just handed them that particular victory. Still, I have to give credit where it’s due: they could’ve just priced their console at $500 and forced gamers to choose between two super-expensive mini-computers (and given Microsoft’s PR issues, customers probably would’ve chosen Sony anyway, even with a price tie), but they went straight for the jugular and made it absolutely no contest. Both machines have comparable horsepower (PS4 has a little faster RAM), both have robust, paid-subscription online services, both have decent exclusives. But one console doesn’t require an online validation every 24 hours, allows used games, and is $100 cheaper. I know that there are still diehard Xbox One fans out there, and I’m glad that they’ve found plenty to like about the console, but if I had to choose, I’d have to get a PS4. Plus, Jack Tretton’s slow evolution from a nervous, sweaty suit to an absolute shark is a joy to watch. I’ll take deliberate ruthlessness over complacency in my hardware execs any day. Hey, speaking of complacency…

Nintendo: After Sony’s conference, it was all on Nintendo. Xbox One looked like it was primed to fail while PS4 looked just the opposite, but those were both hypotheticals: Nintendo had already been dealing with the reality of a failing console for half a year now. With the PS4 priced at only $50 more than the only Wii U SKU worth getting, Nintendo needed to announce a price cut either in their Direct video or sometime during the show proper. No price cut ever came, which was…not good. Then their Direct was crammed full of sequels that were identical to their prequels, ports, and remakes, none of which were arriving before 2014. If Nintendo was going to have any chance at all against the Xbone or PS4 this fall, it was going to need a killer app, and the Nintendo Direct was Nintendo revealing their hand and showing they had been bluffing the whole time. If you’re going to launch a year before the competition, you better make damn good use of that year and build up your consumer base by selling systems. It’ll be over a year since launch before the Wii U has a killer app, and a lazy HD remake of a game that still looks stellar (Wind Waker) isn’t going to help buffet the storm coming in November. If anything, I’m a Nintendo fanboy, so it pains me to admit that they’re probably completely boned.

I guess none of this really matters because there’s no way I’m buying any of these damn things before 2014. My current gen consoles and my PC have been serving me quite well, and as much as I’d like to be an early adopter, buying the 3DS on day 1 left a bad enough taste in my mouth that I doubt I’ll ever do it again. But man, was it nice to get caught up in the hype along with everyone else on Twitter. Super fun. Same time next year, gents?