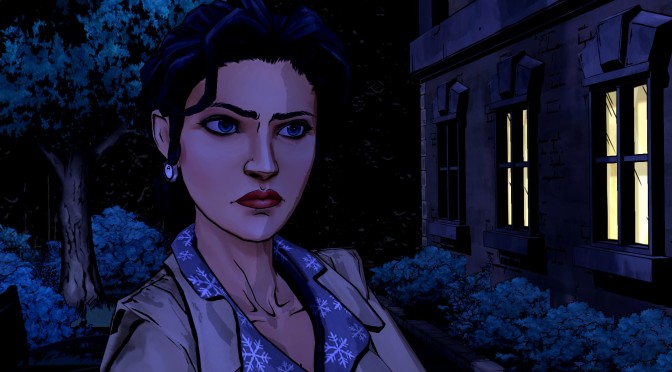 Fashion is all about how you wear the clothes and how it makes you feel when you wear them. I like to consider myself the kind of person who has good fashion sense, but I wouldn’t consider myself an expert in fashion in the least. I don’t always follow the latest trends and I go by what I know looks good on me. I’m more inclined to go for styles that are classic, simple, and will never go out of fashion.

END_OF_DOCUMENT_TOKEN_TO_BE_REPLACED

This week was a pretty good week for gaming. A few games came out and for me there is still some run off from unfinished games from the recent past, so there was a lot to play. I of course played the newest AAA title from Ubisoft this week, Watch_Dogs, but I wanted to talk more about the smaller titles I was able to acquire this week. One of which was The Wolf Among Us as episode 4 came out this past Tuesday. The other game is an even smaller indie horror title called Among The Sleep. So in this post I will yet again give you all the scoop about my week in gaming, enjoy! END_OF_DOCUMENT_TOKEN_TO_BE_REPLACED

Sharing my overcrowded space with my beloved classic literature and fictional books are an ever expanding shojo manga collection. The days when I don’t feel like reading a regular book and prefer the company of beautiful artwork to captivate the eyes and get swept up in romance, humor, and adventure I tend to pick up a manga volume.

I have an appreciation for art and beauty in general and it’s no surprise I became a huge fan of the Japanese style of drawing. When shojo manga became popular in the American market, I gravitated to the pretty art style and the wide focus on romance in most shojo manga. As much as I enjoy the shojo manga genre, it’s only in the last few years have I developed more of an interest in expanding my reading to also include American comic books.

END_OF_DOCUMENT_TOKEN_TO_BE_REPLACED 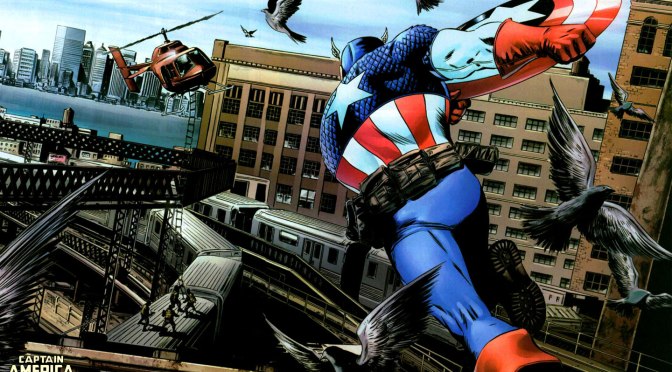 I’m trying to be better about finishing things this year, guys. That’s why in addition to finishing a video game every month, I’m also making it a goal to read a new comic book each month.

I don’t know a lot about comics, so over the December holidays, I made a long (like, way too long) list of graphics novels and comics series that I would like to try. For instance, I’ve never read any X-Men comics. At the time, I had played the first episode of Telltale Games’ The Wolf Among Us but had never read Fables. Things like this, I needed to fix.

I’m happy to report that I’m actually ahead of schedule when it comes to reading my new comic books. Here’s what I’ve read so far this year: 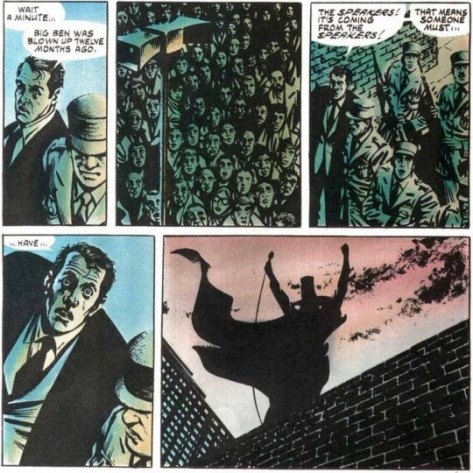 I’ve loved V for Vendetta‘s story for a long time. When I was 18, I went to the cinema by myself to watch James McTeigue’s V for Vendetta film. It had a big impact on me, and it’s still one of my favorite movies — but it took me all this time (what, almost 10 years?) to finally pick up the graphic novel by Alan Moore and David Lloyd.

One of the biggest differences I noticed between the novel and the movie is that in the novel, the character Evey Hammond is 16 years old and about to turn to prostitution when V finds her. She seems like a blank page — sort of a bland character until V molds her into someone with principles and passion. Meanwhile, in the film, Evey (Natalie Portman) is in her early 20’s and working at the news station. She has much more agency from the beginning of the story, and her personality is much stronger. Although I really prefer Evey being older and more confident (as in the film), I still came to appreciate Evey’s depiction in the graphic novel as she matured.

The only thing that didn’t grow on me in the graphic novel is the artwork. Lloyd’s art is a miss for me, personally. I’m not a fan of the color palette, and the overall look is very dated. That being said, there are some creative layouts I enjoyed, such as this one with themes presented along with a musical score: 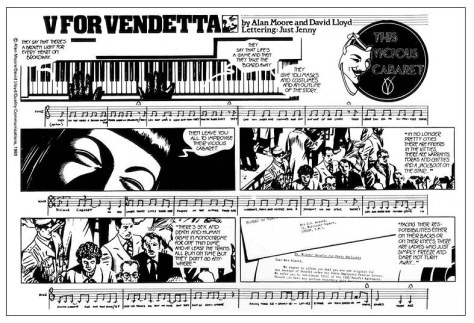 And the story is as brilliant as ever. There are moments that make me cry, and it’s all because of how bittersweet and poignant and hopeful this story is. Moore’s writing is amazing.

Inspired by how much I enjoy Telltale Games’ The Wolf Among Us, I decided to give Bill Willingham’s Fables a try. And let me tell you, the comic books are way better than the games based on them. (I know, I’m the last one to the party on that.) I’ve enjoyed the stories, which are set in a world where fairy-tale characters live in a New York City community called Fabletown — or, for those who aren’t able to blend in as humans, a farm in upstate New York. The stories are fun reads with some interesting themes, and the art is lush if not always super crisp to me. 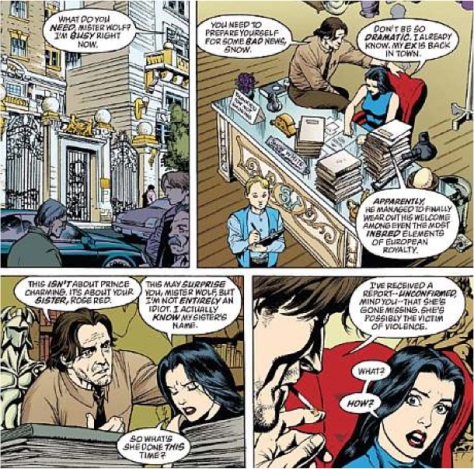 I love that the comic books are starting to sprawl more than the games. There are obviously so many characters with so many stories to tell, and I know I won’t make it through all of them any time soon. However, I love seeing familiar characters in brand new stories.

I finished the first two trade paperback volumes, Legends in Exile and Animal Farm, and will continue reading the next few as I have time.

Captain America is one of my favorite superheroes ever, so I need to be reading his comic books all the time like I do with Thor and Batman comics. I picked up the Winter Soldier collection in the hopes that it ties in with the Winter Soldier movie coming out next month (which I cannot wait for!).

I won’t go into details about the plot, because that seems secondary in a lot of ways. What I love about this story is that writer Ed Brubaker makes Cap a relatable guy suffering from misplaced memories of his life during World War II and grief over losing his best friend Bucky. He’s tired. He worries that he’s going crazy. At one point, he’s so distracted by what’s going on inside his head that he can barely fight back when attacked. I love reading Steve Rogers when he’s like this.

Plus, the art. I may not know a lot about what constitutes “good” comic book art, but Steve Epting’s work in these volumes just makes me hurt inside to see such beauty. That’s how dramatic I get about these pages. I just want to stare at them all day.

I’m going to continue reading the rest of Brubaker’s work on Captain America for the next month. Although I have to admit that I have a very long list of comics to get through this year… =)

Stories of redemption or second chances, if told and done well, are attractive for most people for a number of reasons. Just like when we enjoy seeing the good guy win in the end, we like to see who we think are formerly irredeemable characters turn a new leaf and walk the path of good. There are struggles the character undergoes to either forgive himself or herself for the sins of their past, while also changing the minds of those who don’t believe the person can truly change. Whether the character really does change or not is another part of the journey that’s worth waiting to find out.