My pre-teen niece recently celebrated another birthday. Prior to the festivities, I asked her what she was hoping to get.

“A typewriter!” came the enthusiastic response.

“No…a typewriter,” she repeated as if I had become deaf, and dumb.

She didn’t skip a beat. “Because they are cool.”

Still, I couldn’t quite wrap my head around the image of an young, modern girl sitting down to formulate a document via and old-fashioned typewriter, but what did I know. The fact that she even knew what a typewriter was floored me. But it became a strangely proud moment as I considered “hey, my niece knows what a typewriter is! Take that iPad society!”

It also got me thinking about the notion of “future retro,” which I might have just made up or might actually be a thing. Either way, when I say “future retro” I mean: what items of the recent past may someday become the “cool” things of the future? Like, will vintage-minded folks someday seek out “rare” 2014 skinny jeans? It’s a funny thought when applied to culture generally and in the present, but being “vintage” nowadays is serious business. Blame the cosplay geeks, hipsters, steampunk aficionadas if you like (I know I do), but lots of paraphernalia from whatever “good ol’ days” of your choosing has come back in style – from Victorian household goods such as typewriters to 1950s cookware. It begs the question, “What ‘future retro’ goods might my niece’s descendants someday seek out and call ‘cool’?” Here are a few ideas. 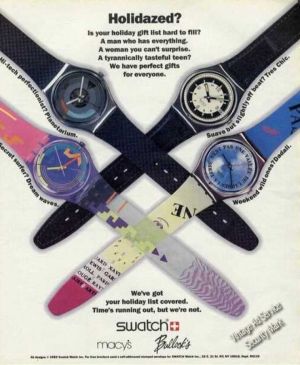 Watches are staples in any jewelry display, but are they truly a necessity anymore? Same goes for clocks – wall clocks, alarm clocks, grandfather clocks! When was the last time you bought one? For many people now, cell phones are their watches and clocks. Why spend the extra money onannoying artifacts that need batteries and are set wrong more often than not when you have a cell phone that can give you the most accurate time possible? Watches have become status symbols more than anything. And clocks, analog clocks…we’ll, they are cool to look at, but everyone knows that kids can’t tell time these days. It’s not hard to imagine a future vintage shop filled to the brim with these old-fashioned time-telling devices. 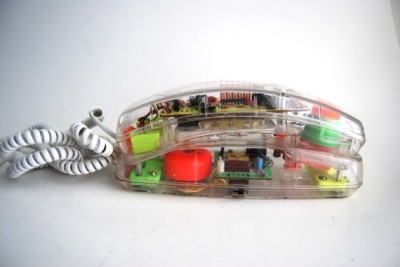 In a junk drawer somewhere, I have an old, beige, and very plastic landline phone. I’m pretty sure it came from the likes of Radio Shack and cost no more than fifteen dollars. It’s hard for me to consider that something like that ugly phone might be considered “cool” again, but it could happen! Of course, there are plenty of better-looking landline phones out there now and from the past, so the notion of being “cool” is relative. Regardless, there’s no doubt that landline phones will become a thing of the past. Which means they’ll become the kitsch of the future. Shoot, I bet those classic see-through phones from the 1980s will fetch millions! Or…maybe there will just be millions of them available. Either way, they’re bound to come back in fashion, even if there are used only as decoration.

Despite repeated attempts to attain one as a birthday or Christmas gift in high school, I never received my own camera. Well, I know I’ll be able to rectify that in forty years because the vintage shops will be full of those little point-and-shoot babies! In the not so distant past, point-and-shoot cameras were dime-a-dozen, and they came in as many styles as there are stars in the sky! Right now, many photo enthusiasts are favoring older style cameras, early 20th century models completed with glass slides, black sheets, and flash bulbs the size of small animals. So it’s only a matter of time before the point-and-shoot  film guzzlers enters the realm of vintage rediscovery. And never mind the film, because our future selves will no doubt be well-versed in the ways of retrofitting and repurposing.

What instances of recent past or current tech do you think will become the retro goodies of the future?

Like what you’ve just read? Cary posts to Geek Force Network every Friday; and you can also find more words that she put together in paragraphs at Recollections of Play, United We Game, and 8bit Kitchen.