One of the difficulties when adapting a video game for comic books is deciding how to handle the art direction.  As technology expanded beyond the 8-and16-bit eras, designers found themselves with a wide array of tools to create very complex and detailed visuals.  Hand-drawn illustrations no longer had to be translated into a limited pixel space; the characters and settings could be fleshed out into smooth three-dimensional worlds.  This presented an inverse problem for comic writers, who now had the task of moving these environments from screen to page.  I can imagine it was particularly troubling when dealing with very distinct art styles.  For example, how would you transform a game like Killer 7 into comic book form?

In 2005, Capcom approached two companies with a license to produce a 12-issue comic series based on Killer 7.  Founded in 1999 as a commercial art studio and a small press comic publisher, Devil’s Due Publishing(DDP) had a breakout success with a 2001 revamp of G.I. Joe.  Since that time, DDP has published an array of titles, such as Hack/Slash, Dragonlance, and Forgotten Realms.  The publisher collaborated with Kinetic Underground, a design and marketing company founded by David Forrest in 1997.  Over the years, Kinetic Underground has worked with companies like Hasbro, Disney, and Sesame Workshop to create high quality toys and merchandise.  A zero issue of the comic was included as a pre-release bonus with the video game in certain retailers, and the rest of the series hit comic book stores in February 2006.

With a plot revolving around an assassin’s group made up of alter egos, Killer 7 was ripe for adaptation into other media.  The game centers around Harman Smith, a seemingly retired assassin who serves as the “master” personality over seven deadly alter egos.  Players must switch between his seven different personas and utilize each character’s special abilities to complete the missions.  The Killer 7 are hired to deal with various unsavory characters who would threaten the delicate balance between recently peaceful nations.  During their assignments, they encounter violent creatures called “Heaven’s Smiles.”  Once human beings, these monsters have been transformed into grotesque walking bombs that maniacally laugh right up to their demise.  The entire game is rendered in very dark cell-shaded visuals, which creates a sort of pseudo-noir look to the environments.  Violence is frequent in Killer 7, with plenty of gun-battles and explosions, but the clean and sparsely detailed look of the game changes the overall tone into something quite different from the cerebral action movies that inspired the game. 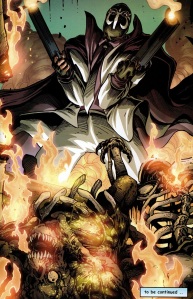 Since Killer 7 already has an ideal story for comics, Devil’s Due and Kinetic Underground decided to leave much of the game’s plot intact.  Extra dialogue and transition scenes were included to keep things cohesive, which is a nice addition since the game expects the player to connect the story-dots at several points during gameplay.  The big difference between the comic and the video game can be seen in the art style.  The heavy shading and sharp contrast remains on some of the pages, but the sleek cell-shaded visuals have been abandoned for the more traditional look of comic book art.  Facial expressions have plenty of lines and wrinkles to show emotion, and scenes of violence have extra detail added to the gore and mayhem.  The “Heaven’s Smiles” are particularly gruesome, and would look more at home in a low-budget zombie movie.  All of these changes alter the mood of Killer 7 quite drastically, and the almost haunting tone is lost in transition.  The engaging and complex story of the game takes a backseat to the big explosions and visceral gunfights in the comic books.

As with many other video game adaptations, Killer 7 never reached a point of completion.  Four issues were released to the public before the project was abandoned, leaving two-thirds of the story behind.  Since the game’s plot becomes even more complex as the player progresses, I am curious just how the comic would have handled later developments.  Would the hyper-violence have been abandoned to address the higher details of the story, or would the battles just get bigger and bigger until the pages are dripping with blood and guts?  Judging by the first four issues, I imagine the latter would win out, which is a shame since Killer 7 is generally praised for its story and visuals over the combat and gameplay.  But that is the trouble faced when adapting a video game to the printed page.  Even with an ideal tale for comic book adaptation, distinct visuals put the writers in a tight spot, and anything less than the original art style will be met with harsh criticism.  In the name of Harman…